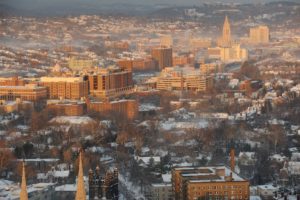 Residents of Larimer and East Liberty could receive as much as $20,000 to fix up their homes under the federal Choice Neighborhoods program.

The Pittsburgh Urban Redevelopment Authority is proposing the grants as part of a strategy for rebuilding the two neighborhoods with the help of $30 million in Choice Neighborhoods funding awarded in 2014.

Much of that money will be used to build 334 new mixed-income rental units as well as for-sale houses, green infrastructure and parks.

But Tom Cummings, URA director of housing, said the grants are one way that existing homeowners in the two communities can benefit from the initiative and the wave of development sweeping through East Liberty.

To be eligible for a grant, a resident must be the owner of the house and the taxes or payment plans on the taxes must be current. The homeowner also must allow an inspection of the house.

The grants are mainly for exterior improvements, such as roofs, porches and sidewalks, although Mr. Cummings said some money could be used for the inside, particularly if health or safety issues are involved.

He estimated that as many as 200 people could end up applying for the grants, which will be rolled out in phases. He hopes to award the first ones this spring.

The U.S. Department of Housing and Urban Development, which administers the Choice Neighborhood program, has given preliminary approval to the concept, Mr. Cummings said. The URA board will vote on the proposed guidelines next month.

Also Thursday, the URA board approved:

• About $2 million in loans to help with the construction of the Hillcrest Senior Residences in Carrick. The $15.7 million four-story building will feature 66 mixed-income units — 54 one-bedroom and 12 two-bedroom.

Fifty-six of the units will be set aside for households with incomes at or below 60 percent of the area median. Ten units will be market rate. To qualify for a unit, at least one household member must be age 62 or older.

A former Giant Eagle on Brownsville Road will be demolished to make way for the complex being developed by The Community Builders Inc. The units will be built to energy-efficient passive house standards.

• A loan of up to $360,300 to Hitchhiker Brewing Co. of Mt. Lebanon to expand its operations to a 10,000-square-foot space at 1200 Muriel St. on the South Side. Hitchhiker will use the new location for manufacturing and wholesale distribution and as a retail tap room. The Mr. Lebanon site, now used for manufacturing, will remain a retail tap room. The expansion will create about 12 jobs.