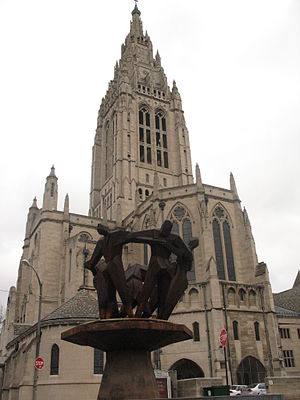 The rise and fall of East Liberty is a familiar story in Pittsburgh. In its ‘golden era’ in the 1940s and 1950s, East Liberty exemplified a vibrant commercial center and a tight-knit residential community. Pittsburgh’s ‘second downtown’ declined rapidly in the 1960s after an ambitious urban renewal program designed to remake East Liberty so that it could compete with the new suburban markets and shopping malls.”

Native Americans were of course the first inhabitants of the region now known as Western Pennsylvania. Settlers came in covered wagons from the East, acquiring property and building houses. They also cultivated family farms or large gardens. By 1780, both East Liberty and Highland Park had orchards, and by the early 1800s, East Liberty was at the center of travel from east and west.

Over the next fifty years, a single-track railroad went from Pittsburgh, through East Liberty, to Philadelphia. This reduced travel time from Pittsburgh to East Liberty considerably resulting in more people coming to the area to build homes. With the influx of people came businesses and churches.

East Liberty grew a great deal between the end of the Civil War and the end of the 19th Century. A racetrack, stockyards and businesses lined Penn Avenue and the adjoining streets. East Liberty at one point was considered the richest suburb in America, with families with names such as Carnegie, Heinz, Hunt, King, Lockart, Mellon, and Westinghouse all living in East Liberty. 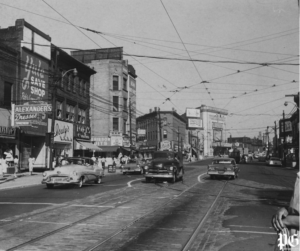 The early decades of the Twentieth Century were the peak of progress for East Liberty. Industry was booming, schools were being built and the social life of the community flourished. Automobiles arrived at the beginning of the century. Of the 3,000 automobiles in Pittsburgh, 2,000 were in the East End.

East Liberty was a very successful regional business district until 1958. At that time, faced with the first commercial vacancy in decades, increasing vehicular congestion, lack of parking and competition from the suburbs, East Liberty’s business leaders began to call for change. While future actions were based on the desire to maintain East Liberty’s strength, the change that occurred facilitated the community becoming one of the nation’s largest urban renewal projects, and contributed greatly to the demise of the once-vibrant community.

Two decisions in the 1960s negatively changed East Liberty. The first was an attempt to halt a slow trickle of businesses from the City to the suburbs, as some of East Liberty’s larger merchants observed that some residents of Pittsburgh’s East End were moving to the suburbs. It was also becoming evident that suburban shopping malls were growing and expanding. These merchants feared that suburban development would harm East Liberty’s status as a market center, and asked the City of Pittsburgh’s Urban Redevelopment Authority (URA) to take action.

Sadly these two actions ultimately not only failed to preserve East Liberty as a market center, most would now say that the decisions hastened the community’s downfall. Routing cars away from Penn Avenue, which was the URA’s street plan, seemed to send a message that the neighborhood’s commercial center was not worth visiting. The new government-subsidized housing became a nuisance as it fell into disrepair over time. Most of the new suburban-style development around Penn Circle failed, leaving a moat of vacant buildings and empty expanses of cracked pavement.

In 1979, the East Liberty Quarter Chamber of Commerce formed the nonprofit East Liberty Development, Inc. (ELDI) to facilitate redevelopment efforts in the neighborhood and begin the process of reversing the effects of urban renewal. Progress was uneven and slow through the 80s and 90s, and in the late 1990s, new leaders in East Liberty brought a sense of urgency to tackling old problems. They recognized that overcoming fragmentation and division by developing an aligned neighborhood had to be a top priority. Through a community-driven process, stakeholders developed A Vision for East Liberty.

This 1999 community plan set the stage for the next generation of revitalization which has brought about the current thriving community. The plan highlighted community initiatives that represented the beginning of local investment and success, which became the building blocks for change. East Liberty was determined to reposition itself as a successful, self-sustaining community once again.

Community plans are living and breathing documents and as progress was made and change came to East Liberty it was necessary to revisit the plan. The community celebrated the publication of a 10-year update to the Community Plan in May, 2010. The 2010 East Liberty Community Plan is a long-term framework for revitalization.

East Liberty can boast many positives today, including the offices of Google in Bakery Square that has stirred further development. Early successes were the establishment of Home Depot, Whole Foods, Target, Trader Joes and many smaller businesses in the neighborhood. A wide array of Pittsburgh’s unique restaurants and bars are in East Liberty including: Union Pig and Chicken, BRGR, Plum, Spoon, Ava, and Paris 66, in addition to other eateries and local favorites. Two unique hotels are now open, Hotel Indigo and the Ace Hotel Pittsburgh which is in a century-old former YMCA building at the heart of East Liberty. Large construction projects including Bakery Square 2 and the East Liberty Transit station and development are attracting new retailers to East Liberty and building many new luxury apartments. One such development of high end apartments is the impressive $30 million restoration of the historic (1920) Daniel Burnham-designed Highland Building by Walnut Capital on the corner of Highland and Centre. That project features 117 apartments and it is 100% leased with a waiting list.

A rebirth of East Liberty and the beginnings of a new golden age are being witnessed today.