Homewood is a neighborhood in Pittsburgh, Pennsylvania. Located in the eastern part of the city, it’s bordered on the east by East Hills, on the west by Larimer and Shadyside, on the North by Lincoln-Lemington, and on the south by Point Breeze. 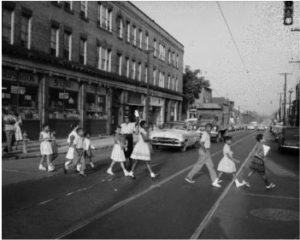 Similar to several other sections of Pittsburgh, there was a rise and fall of this community, along with a “golden age.” The early history of Homewood was one of growth. It was incorporated in 1832 and annexed by the City of Pittsburgh in 1834. In 1852 the Pennsylvania Railroad built a line with a stop in Homewood. This enabled wealthy industrialists to escape the grime of the city. Both Andrew Carnegie and George Westinghouse lived in Homewood in the late 19th century. In 1890 street car lines extended to Homewood, allowing middle class residents as well to move to the community to escape the soot and dust of the city. In the early 20th century the population of Homewood grew with waves of German, Irish, and Italian immigrants along with upper middle class black families moving into the community.

There were many good decades of life in this part of Pittsburgh. By 1950 Homewood was a thriving, diverse working class community. The 1950 census declared a population of 34,000 and 22% were African American. In the early 1950s the City of Pittsburgh cleared the lower Hill District to make way for the Civic Arena. This displaced thousands of African American families, many of whom moved to Homewood. These were largely low income families who lived in apartments, changing the home ownership and racial demographics of the community. The influx of low income African Americans accelerated the flight of white families to suburban communities. By the 1960 census Homewood was 66% African American and the population had fallen to 30,000. 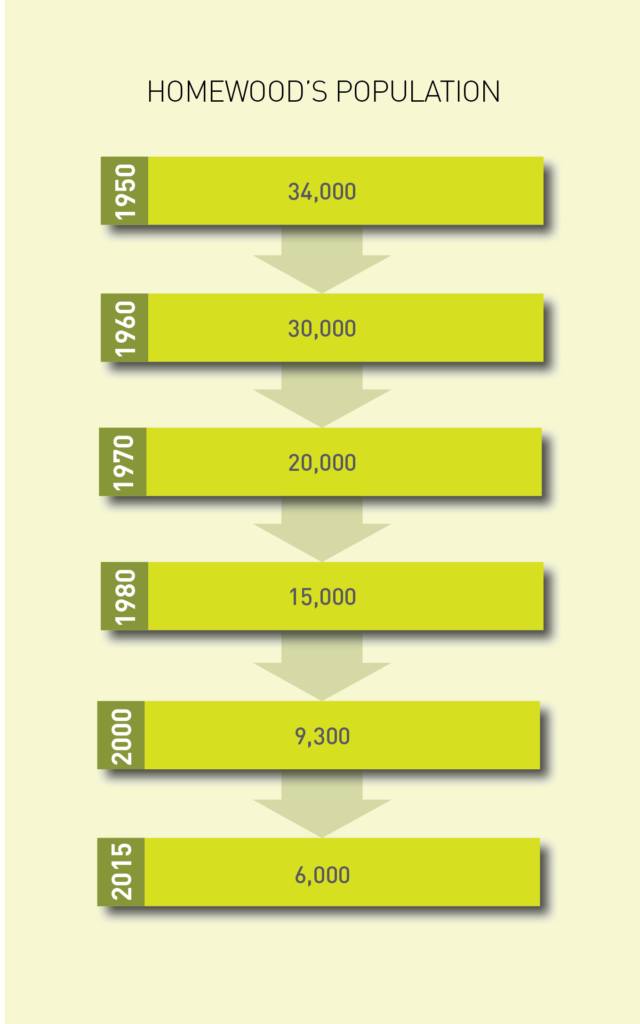 Two events in 1968 had a devastating effect on Homewood. Following the assassination of Dr. Martin Luther King there were two days of riots and looting. The business community was irreparably harmed and has never recovered. Also in 1968 the Civil Rights Act was passed. One of its provisions was the Fair Housing Act. This gave African Americans the opportunity to live in a wider variety of communities and many of the more affluent families moved to Plum, Penn Hills, and Monroeville. The population of Homewood continued to decline: it was 20,000 in 1970 and 15,000 in 1980. By the 2000 census the population had shrunk to 9,300 and 98.3% were African American. Currently the population has fallen below 6,000.

Momemtum is building for positive change in Homewood today. Community assets such as the Carnegie Library, the YWCA and CCAC continue to bring positive programs and effects to the neighborhood. Community-based organizations have been operating in Homewood for years, albeit working independently, toward addressing specific community problems. Over the last year many of these organizations have worked toward coming together to create a comprehensive development process that holistically addresses Homewood’s needs. These organizations include:

In addition, the Department of City Planning of Pittsburgh has developed a Request For Proposal (RFP) for a comprehensive community plan for Homewood which will encompass all past work that has been completed as well as the investments of the HELP Initiative. City Planning has also secured the needed funding to develop the plan.

Most feel that Homewood will be the next community in the East End to be developed after years of progress in East Liberty and now Larimer.