Larimer is a neighborhood in the East End of Pittsburgh, Pennsylvania. The neighborhood takes its name from William Larimer, who grew up in nearby Westmoreland County and, after making a fortune in the railroad industry, he built a manor house overlooking East Liberty along a path that later became Larimer Avenue. Larimer was originally settled by Germans in the latter half of the 19th century. By the early 1900s Italians became the dominant ethnic group. These settlers built detached brick homes with small yards and Larimer became Pittsburgh’s Little Italy until the 1960s.

As with other neighborhoods in Pittsburgh’s East End, the 1960s were a turning point for Larimer. Some residents began to move to the suburbs in the early part of the decade, and this process was hastened by the urban renewal of East Liberty and the construction of a 320-unit housing project on Larimer Avenue near the entrance to Larimer from East Liberty. Today, there are many once-proud brick houses that are either abandoned or neglected by absentee landlords, and the residents are among the poorest in Pittsburgh. The population peaked in the 1940s and in 1950 it was roughly 12,000. The population declined to around 1,728 people in 2010.

After 30 years of decline and multiple past planning initiatives, in 2007 the citizens and partners of Larimer organized to create projects that they felt would change their community from the inside out—and in the process, this consensus group would learn to work together, build trust, create immediate results and position community members as leaders in the future development of their neighborhood. It was believed that this work would be needed to attract the resources necessary for a strong, vibrant and safe place to work, worship, and raise families. The plan was presented to the community in 2008.

The initial plan’s vision was to create a safe, clean, strong, diverse, vibrant, healthy, and attractive community with a renewed sense of pride. The plan was that Larimer could be a model for inner-city revitalization. The report spelled out the community’s challenges and assets, and laid out goals and how to get those goals accomplished.

The Larimer Consensus Group and its partners worked in 2010 to create a second plan — a comprehensive land use plan, vision and market assessment for the Larimer Avenue Corridor. The Larimer Vision Plan in November 2010 noted these challenges and goals:

Many of the challenges faced by Larimer, such as high vacancy, an older housing stock, a shrinking and aging population, are problems faced by many communities across the Pittsburgh region and across the country. The opportunity here is to address the very real problems of the neighborhood in a manner that is a state-of-the-art model for the Pittsburgh region. In building a Sustainable Community, a major goal is to establish a new identity as a state-of-the-art green community. To achieve this goal the community believed that it should take steps to set itself apart as innovative and green. In addition to providing ecological benefits and distinguishing Larimer within the region, urban sustainability strategies can contribute to the economic revitalization of Larimer.” 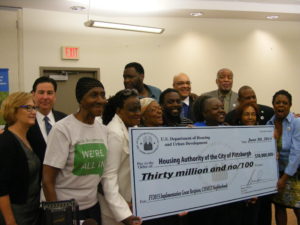 In June of 2014, Larimer was joyous when it learned that it was awarded a highly competitive $30 million Housing and Urban Development Choice Neighborhoods grant. The money was designated to build 350 mixed income housing units. Mixed income housing is one of two primary mechanisms to eliminate neighborhoods of concentrated poverty, combat residential segregation, and avoid the building of public housing that offers 100% of its housing units to those living in poverty. This is a point often brought up by Councilman Burgess who notes that public housing clusters poverty and that concentrated poverty is a community’s worst enemies.

Despite this wonderful accomplishment of winning the Choice Neighborhoods award, the community understands that the grant is just one step in a long and ongoing process of turning the neighborhood around.