Categories: HELP in the News,Homewood News,News 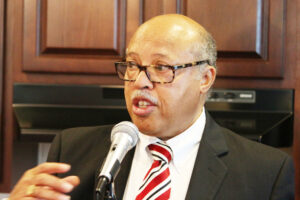 Though moves to address the lagging development at the Hazelwood ALMANO brownfield were of primary concern during the Urban Redevelopment Authority of Pittsburgh’s July board meeting, it also authorized low-income housing and property development in the East End and the Hill District.

Piggybacking on the construction of the new senior housing facility and for-sale housing on Finance Street built by Rev. Samuel Ware’s Building United, the board approved up to $700,000 in loans for Susquehanna Homes Housing LP to build 36 rental homes along Susquehanna, Tioga, and Dunfermline Streets and Panke Avenue in Homewood.

Additionally, the units will be available for purchase at the end of the 15-year LIHTC compliance period at a rate affordable to the tenant.

The board also approved the sale of 61 tax-delinquent properties to the Housing Authority of the City of Pittsburgh for $1 each, plus costs, for the third and final, scattered-site phase of its Addison Terrace redevelopment project.

The bulk of these properties are actually on the other side of the Hill along Webster Avenue and Wooster, Trent, Elmore Streets. Three additional sites are expected to be transferred for the project by the end of July.

Pending approval of final drawings and proof of financing, construction on the $20 million, 52-unit development is slated to begin in the fall. The developer is Keith B. Key Enterprises.

In other business the board approved $200,000 grant to East Liberty Development Inc. to administer the Homewood, East Hills, East Liberty, Lincoln-Lemington-Belmar, and Larimer Protection Initiative.

The initiative’s broad goals are: to preserve and increase affordable housing choices, and to to develop diverse, mixed-income, sustainable communities.

Along those lines, the board also approved the purchase of 29 properties along Hamilton Avenue, Susquehanna Street and Formosa Way for future housing development.

The board also voted to seek $3 million in state grant funds to finish converting the final section of Penn Circle back to two-way traffic. The plan also calls for adding three traffic signals and a bicycle lane.

As for ALMANO, the board voted to change the start date of the Tax Increment Financing period from 2013 to 2017 because no tenants are yet on site—so no debt has been issued. Uber has plans to build test roadways for its driverless cars, but no other deals have been made.

That should change once $25 million in road and utility construction is completed by year’s end.