Home » Rebuilding Together to Rehab 150 homes in County this Year

Rebuilding Together to Rehab 150 homes in County this Year 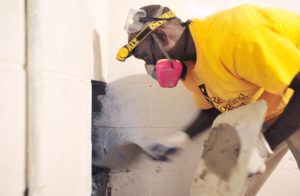 Gracey Evans/ Post-Gazette Antwan Mckamey works to fill in a hole in the basement of a house in Hazelwood that Rebuilding Together Pittsburgh is helping to renovate for a family.

For years, Adeline Fratangelo shivered in her sewing room because her windows weren’t insulated. Her Hazelwood home of almost 50 years also had an unstable kitchen floor, an outdated electrical box, broken front steps, foundation cracks and lacked safety features such as hand rails.

When crews from Rebuilding Together Pittsburgh assessed the needs earlier this year, they added to the list concerns about mold in the basement where she cans tomatoes.

Then they had to assure the 80-year old resident, a 1957 immigrant from Italy, that she wouldn’t have to pay for repairs and updates. RTP is funded by the Heinz Endowments, the Home Depot Foundation, McAuley Ministries, UPMC Health Plan and the Urban Redevelopment Authority.

The mission of Rebuilding Together Pittsburgh is to keep people’s lives more stable by stabilizing their homes. Its core of paid workers depend on volunteer labor when they can get it.

A friend of  Ms. Fratangelo’s recommended she apply to RTP, and her first response was, “I don’t want nothing for free.” But she eventually acquiesced: “When I was younger I did everything. I cannot do now.”

Her oldest of four children was starting first grade when she and her husband Albert moved from public housing in Glen Hazel to Hazelwood as first-time home buyers, borrowing $8,000.

When her husband was alive, working as a cook, and she was working as a seamstress, “we raised four children and fixed this house one project at a time,” going years between projects to pay off loans, she said. But deferred maintenance had outpaced her means.

RTP started in Pittsburgh in 1993, an outgrowth of a national organization called Christmas in April that, once a year, organized people to rebuild a home for a neighbor who needed help. Pittsburgh’s is one of the largest national affiliates and it is trying to beef up its funding sources to hire more people to do more rehabs.

“We want to collaborate with more entities and to get more people to us,” said Brendan Schubert, a board member. “We have good data that show that where we have done this work, there are better rates of paying taxes [on time] and better maintenance” by neighboring homeowners. “We’re open to any entity that wants to sponsor a house.”

RTP recipients must be the homeowner resident of at least three years, current on property taxes or a qualified repayment plan and have income less than double the federal poverty level. The federal poverty level for one person is $11,880, so a one-person household would not qualify if its income tops $23,760.

The organization is rehabbing 150 projects this year in Allegheny County. Most of its clients are elderly, disabled or veterans, said Danielle Wilson, RTP’s director of development and communication.

Hazelwood is one of nine neighborhoods in which it is clustering its effort for greater impact. On Trowbridge and Gertrude Streets, which intersect, RTP has renovated 10 owner-occupied homes and two vacant homes for resale to low-income families. The Hazelwood Initiative, a nonprofit advocacy group, bought the vacant homes for that purpose.

With the enormity of future development at the former LTV Coke works, Hazelwood anticipates a jump in investment throughout the neighborhood over the next 10 years. RTP wants to improve habitability and value for low-income people so they can keep living there when that happens, said Ms. Wilson.

The other impact neighborhoods are the Hilltop, which includes Beltzhoover, the Hill District, Homewood, Wilkinsburg, Larimer, Penn Hills, Sharpsburg and Sheraden.

In 2014, RTP began training and hiring workers in the neighborhoods where it works, offering each trainee 500 hours. They rehabbed 23 homes in Hazelwood before 2014 and have done 40 since.

One trainees, Davon Morris, was hired as a full-time crew leader.

“If these homes were eliminated,” he said, “there’d be no place for people to go.” He said he loves the work but is even more energized to be working in his own neighborhood.

Last spring, the crew started in on a house on Mansion Street that had become tax delinquent and was being used as a dump. After filling three 30-yard Dumpsters, they replaced the roof, siding, windows, electrical, plumbing and “quite a bit of corrective carpentry,” said Josh Nard, project manager for Hazelwood. “Between our crews and our volunteers, there’s not a lot we can’t take on.”

The crew swells when employees from companies participate in volunteer event days. A crew from the Coast Guard was one such cadre working at Mrs. Fratangelo’s house.

“Miss Adeline, these guys are going to put a handrail down the basement stairs,” Andy Hromoko, RTP’s director of operations, called up to her.

Sitting at her kitchen table, Mrs. Fratangelo put her hand to her heart and tilted her head, smiling.

“We need you to come down here because Rich is going to measure where your hand’s going to be,” he called.

She walked partway down the stairs, showing where her hand would be, then continued to the bottom to point out her canned tomatoes. Across the basement, workers were parging the mortar in the sandstone foundation.

As she headed back upstairs, she paused and watched them. “Beautiful,” she said, putting her hand to her heart again. “God bless you.”