Home » Pittsburgh Land Bank 101: What you need to know about the blight program

Pittsburgh Land Bank 101: What you need to know about the blight program 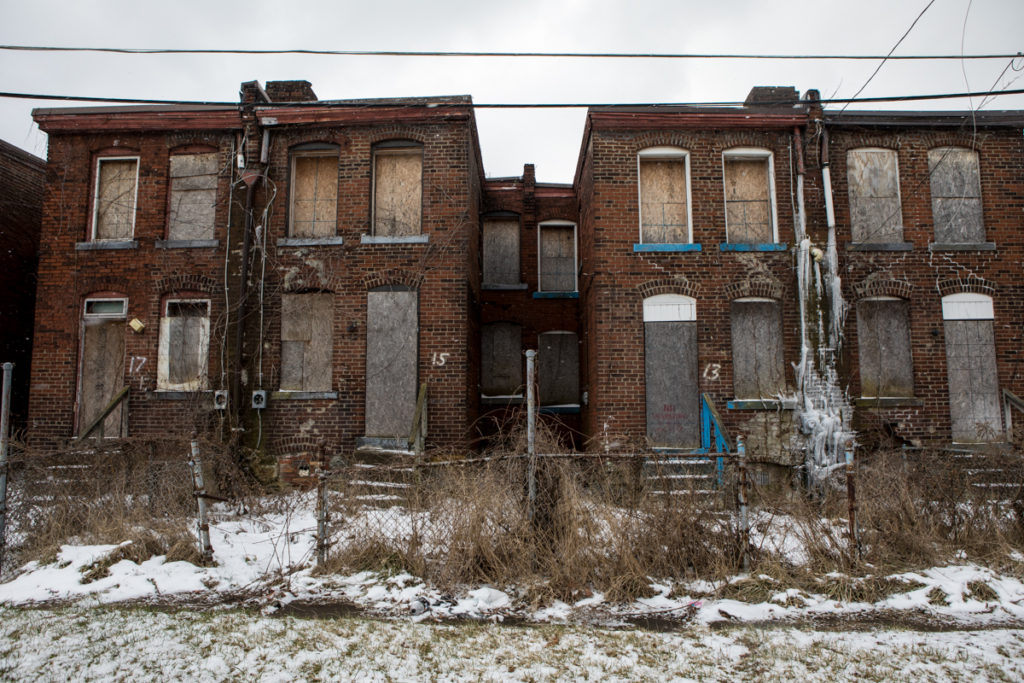 The rear view of boarded up homes on Hamilton Ave. in Homewood. Jasmine Goldband / The Incline

In early 2014, Pittsburgh City Council voted to create a land bank, a program that takes blighted property and vacant lots and returns it to the community — and tax rolls.Now, nearly three years later, the land bank’s board has released draft policies and procedures proposed to guide the mission. On Monday night in the West End, they kicked off a series of community meetings seeking public input on the 27-page document.Blight is pervasive issue in Pittsburgh, with an estimated 30,000 distressed properties in the city.While Pittsburgh and Allegheny County both run a number of initiatives that target blight, “it was no one’s job … to look at all of that vacant and blighted property and to get it back into productive use,” Bethany Davidson, manager of land recycling for the Urban Redevelopment Authority, told those assembled Monday. Davidson is acting as the land bank’s day-to-day administrator on a contract basis.

Coordinating with the different agencies that deal with vacant and blighted properties in some way “to ensure alignment and efficiency” is one of the land bank’s tasks, as laid out in the draft.

“Its job is to make it faster, easier and cheaper for responsible persons — new owners, even developers, community groups, private individuals, farmers, gardeners, builders, contractors — to fix up blighted, abandoned and distressed properties … so [they have] a future productive use,” she said.

The land bank, however, “doesn’t have to do the same thing in every neighborhood,” Davidson said. The policies and procedures draft lays out the basic why and how, while a subsequent document will go into more specifics.

The process of finalizing the land bank’s policies and procedures “has to be open, and it has to be transparent,” said state Sen. Wayne Fontana, a board member, as it’s important to “get it right before we start.”

Ready to learn more? Here’s a Land Bank 101 as presented Monday. You can also find a draft of the policies and procedures here.

What makes a land bank so special?

Before 2012, land banks couldn’t exist in Pennsylvania. The state legislature passed a bill that year that allows municipalities with a population greater than 10,000 people to establish a land bank, essentially in the way they see fit.

Land banks — ideally — make the process of purchasing distressed properties easier and faster than it is currently. Special powers given by the state include an expedited foreclosure process, which shortens the acquisition process, Davidson said.

Who are the board members?

In addition to Fontana, City Council members Rev. Ricky Burgess, Theresa Kail-Smith and Daniel Lavelle serve on the board as their districts (9, 2 and 6, respectively) are most affected by blight. Pittsburgh Director of Finance Paul Leger is also on the board as are community members: Dr. Jamil Bey, Diamonte Walker, Steve Mazza and Tara Sherry-Torres.

How does the land bank acquire property?

Property and land can be acquired through donation or purchase, but Davidson said the city expects to acquire most of it through tax foreclosure.

What kind of property is the land bank looking for?

Here’s how the prioritization is summarized on the land bank’s website:

The land bank will not acquire a property with known environmental contamination in most cases.

Who can buy property from the land bank?

Anyone in good standing with the city and state. That means no back taxes (property, income or otherwise) or outstanding citations for properties already owned. People whose property has been foreclosed upon in the past five years are also not eligible.

How much property can the land bank acquire?

There’s not a limit, but the policies and procedures draft states that the land bank can’t acquire more land than it can handle.

In keeping with its mission and not intending to be the long-term holder of property without end use, as well as the budgetary guidelines set forth in the Ordinance, the adequate maintenance of the PLB’s existing portfolio of property shall take priority over new acquisition in any given budget year. Upon ensuring the adequate maintenance of its existing portfolio, the PLB may elect to acquire new properties per its annual strategic priorities with its remaining budgetary resources.

How much will the properties cost?

Davidson said the properties will sell for fair market value as determined by the land bank.

Will low-income buyers be considered?

Yes. In fact, they’ll get priority if there are multiple buyers interested.

Are people in favor of the land bank? Opposed?

Those in attendance asked a handful of primarily logistical questions.

The strongest objections came from a man who saw the work of the land bank as redundant. “It’s a land grab as far as I’m concerned,” he said.

When and where are the other meetings?

You can also provide comment via this form or by emailing engage@pghlandbank.org.

Read The Incline article at: https://theincline.com/2017/03/15/pittsburgh-land-bank-101-what-you-need-to-know-about-the-blight-program/