Home » The Next Hot ‘Hoods in Pittsburgh – Larimer

The Next Hot ‘Hoods in Pittsburgh – Larimer 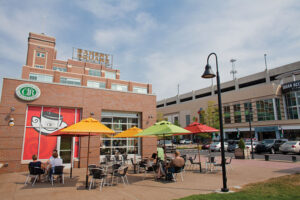 Larimer (pronounced “Lahr-mer” by locals) takes its name from the founder of Denver, Colo. —  Westmoreland County native William Larimer Jr., a settler, railroad tycoon, Kansas state senator and land developer. He built his home on what is now Larimer Avenue in order to be close to East Liberty, which by the mid-1800s was a wealthy neighborhood with a lively business district. Larimer Avenue remains the main thoroughfare through the neighborhood, and a visitor today would be hard-pressed to drive along it without pausing for a construction truck at work.
Surrounded on all sides by active neighborhoods including Highland Park, East Liberty, Shadyside and Point Breeze, Larimer is easily accessible by car or bus via its major boundary roads of Negley Run Boulevard and Washington Boulevard/Fifth Avenue as well as the major arteries of East Liberty Boulevard and Frankstown Avenue. Approximately 1,730 people live in Larimer, according to the U.S. Census; the neighborhood primarily is made up of single-family homes and vacant parcels of land, although some properties are devoted to light industry. It also contains a number of important churches and institutions, notably the 7,500-member Mount Ararat Baptist Church and the active Kingsley Association community center.

Larimer also is home to one of the most tenacious community activist groups around: The Larimer Consensus Group has worked with government officials, East Liberty Development Inc. and other neighboring community groups and residents to envision a new future. The 2010 Larimer Vision Plan, which follows years of strategy and organizing, catalogues the neighborhood’s problems over the last few decades. It cites the neighborhood’s high residential-vacancy rate (26 percent, according to the 2010 U.S. Census), aging housing stock, relatively poor visibility and poor “curb appeal.” Larimer also has no “Main Street” business district lined with neighborhood-serving shops.

In addition, Larimer historically has suffered from a higher crime rate than the other three neighborhoods featured here. In 2014 — the most recent year for which complete statistics were available from the Pittsburgh Bureau of Police — 47 violent and 105 property crimes were reported in Larimer for a total of 152 crimes. To account for differences in size, neighborhood crime-rate comparisons typically are framed by percentage of population; Larimer’s crime rate was 8.8 percent, as compared with 4 percent or less for the other three neighborhoods on our list.

This aspirational planning paid off when Larimer garnered a high-profile, $30 million Federal Housing Administration grant in 2014 through the Choice Neighborhoods program of the U.S. Department of Housing and Urban Development. Larimer’s applicant team included St. Louis-based McCormack Baron Salazar as housing developer, and Urban Strategies as the partner that will focus on connecting residents to education, job training and employment opportunities. Competing against 43 neighborhoods from around the country, Larimer was one of only four winners of the competition. The funds will be used to build mixed-income housing and green spaces.

Private developer KBK Enterprises, with headquarters in Columbus and offices in Pittsburgh, also is undertaking one of the first major developments on vacant land, called Larimer Pointe. The project aims to provide 40 affordable units (single-family, duplexes, townhomes and apartments) and green space on 2.8 acres at Larimer Avenue and Meadow Street. Certified as an Enterprise Green Community, the project brims with green features, such as energy-efficient appliances and storm water-management interventions.

KBK also is partnering with local developer Emmett Miles on plans for a mixed-use project involving renovation of the vacant Larimer School, built in 1896 and listed on the National Register of Historic Places.

Says KBK Assistant Vice President and Project Manager Jennifer DiNardo, “Larimer is a great community in which to develop because not only is there plenty of vacant land, it has great proximity to the commercial core of East Liberty. The LCG is really dedicated to change and [has branded itself] as a green community — something that is also important to us as developers.”